The Miniport at Gunwharf Quays 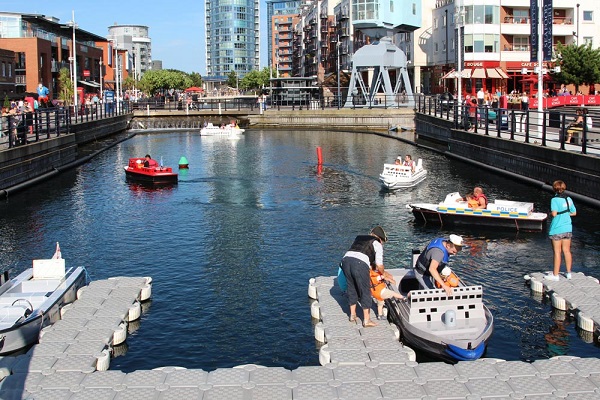 The name Gunwharf Quays, is derived from its function as an Ordnance Yard for Portsmouth Naval Dockyard in the early eighteenth century. Sailing ships, when placed in a dry dock for repair, had to have their guns removed. The weight of the guns, if left on board without the support of the seawater, would have damaged the wooden structure of the ships.
All of the ship’s guns were, therefore, taken off and stored at one of the Gunwharf Quays before the ship was put into a drydock for repair. As ships developed, Gunwharf Quays was not required and became the Royal Navy shore establishment HMS Vernon in 1923.

At the water’s edge, is the spectacular Spinnaker Tower, which at 170 metres (560 feet) is one of the tallest structures open to the public outside London. There are three observation platforms, giving views over Portsmouth, the Isle of Wight and extending to 23 miles. It has a glass floor, which is the largest in Europe. It was opened in October 2005 and represents a spinnaker sail blowing in the wind. Since July 2015, the tower has been renamed the Emirates Spinnaker Tower, following commercial sponsorship from the Dubai airline, Emirates, resulting in it being re-painted in a blue, gold and white colour scheme.

The Miniport at Gunwharf Quays is your chance to captain your own motorised ship. After a short briefing you will put on a lifejacket, descend the steps into the dock area and in no time will be steering out between the buoys and setting course for the lighthouse!